Dive into the brilliant blue waters of the Belize barrier reef with Hamanasi Resort! Experience the best diving and snorkeling adventures in Belize. 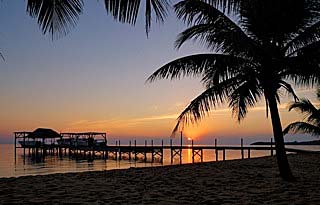 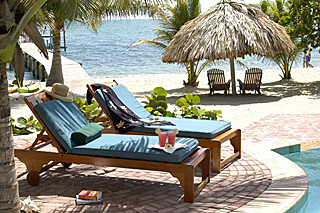 There is a beautiful boutique resort on the Caribbean coast, with a stunning backdrop of the Maya Mountains. The Hamanasi Adventure and Dive Resort is a great place to base your dives on the second largest barrier reef in the world, and to explore the jungle. Each of the 21 air-conditioned rooms, tree houses and suites has a stylish, spacious interior, ensuite facilities and a private porch, set in beautiful tropical gardens. There are 5 room types; Beachfront Room, Beachfront Deluxe, Treehouses, Deluxe Treehouses and Honeymoon Suites.

The resort can offer dives to the Southern Barrier Reef, Turneffe Island Atoll, Lighthouse Reef Allot and the Blue Hole 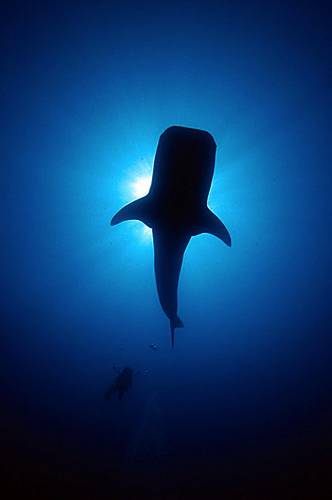 Welcome to Hamanasi, your award-winning eco-resort on the Southern coast of Belize. Their guiding principle is delivering vacation experiences of a lifetime with gracious Belizean hospitality. Voted #1 small hotel in Belize by Tripadvisor.com. From Mayan pyramids deep in the rainforest to pristine reefs teeming with coral, with Hamanasi you’ll discover the best of Belize, on and offshore!

The signature Reef & RainforestpPackages are flexible all-inclusive Belize packages customized to your interests and the length of your stay. Stay in any of their rooms and choose from their most popular adventures both on and offshore. Explore the Reef, the Rainforest, or a combination of both!

Tucked in the coastal forest are Hamanasi’s most spacious accommodations, Deluxe Treehouses. Follow orchid-lined paths under the shade of the littoral forest to arrive at your Deluxe Treehouse. Each enjoys a spacious living room decorated with handcrafted Belizean furniture, most made onsite by Hamanasi’s carpenters, and local art all enveloped in a cool tropical pantone. The sofa may be turned into a double bed.

As an eco-resort instead of cutting trees when we needed to add rooms, we built amidst the trees! Our most popular rooms, these spacious, individual Treehouses provide the utmost privacy. Each is raised approximately 12-feet and is surrounded by a variety of trees, orchids and birds.

Love birds, take note! Our two beachfront suites are the perfect retreat to kindle your romance! The large bedroom has a romantically draped four-poster king bed made of Belizean barba jolote wood and an organic Savvy Rest mattress. The room opens into a comfortable sitting area with a sofa and chairs.

With magnificent sea views and plenty of space, you’ll love the Belizean Beachfront Rooms. These rooms have either a king bed or two queen beds handcrafted of Belizean hardwoods, each with an extremely comfortable organic Savvy Rest mattress. Additionally, all rooms have a sofa that can be made into a full size bed. You can enjoy the refreshing Caribbean cross breeze through louvered windows, or revert to using the ceiling fan or AC.

Traveling with kids? A group of friends on vacation? The Belize beachfront plus rooms are an ideal solution for those wishing to share a room. Enter a room with a mahogany king bed and a table and chairs. In the adjacent room, there are two twin beds. You’ll slumber peacefully on the organic Savvy Rest mattresses. Both rooms have their own entrance to the shared bathroom.

At Hamanasi tantalize your taste buds in our Singanga* restaurant. Choose to dine in casually elegant surroundings either under the magnificent trusses inside the Great House, on the veranda or al fresco on the deck. The many cultures of Belize inspire our cuisine. Every effort is made to source the finest local ingredients and have them delivered from the farm to your table, pure and fresh. Organic produce is used from our edible garden, which you are welcome to tour.

Belize boasts the longest stretch of coral in the western hemisphere and has 3 of the 4 Caribbean atolls. Whether you are a diver, snorkeler or angler, there is a part of the Belize Barrier Reef that will appeal to you – and Hamanasi can take you there! Best of all, you can decide what you want to do after you arrive — less stress! Our experienced guides and staff will make sure you find adventures you’ll love, and show you the world class service that ranks Hamanasi #1 in Belize on TripAdvisor.

Their popular Belize Barrier Reef tours are included in Hamanasi’s packages at no extra cost.

In Southern Belize and directly offshore from Hamanasi is Glover’s Reef Atoll. Named after the 17th century pirate John Glover, who used the remote islands as the base for his raids against Spanish galleons heading to and from the Bay Islands of Honduras, Glover’s Reef probably best represents the incredible diversity and pure diving potential that Belize has to offer. We motor out sixteen miles past the Barrier Reef which takes us just over one hour to the first dive site. If visibility is good we like to dive a site called “The Pinnacles”, which has enormous coral heads rising up 40 ft/12 m or more from the bottom. Our second and third dives are on the east side of the atoll where the water depth quickly drops off to more than 2000ft/660m and visibility is usually over 100 feet.

Lighthouse Reef Atoll is known worldwide in scuba diving circles for its spectacular diving, but it is most famous for a site called the Great Blue Hole. Originally a cave whose roof collapsed thousands of years ago and filled with water, the Blue Hole forms a perfect 1,000 foot/300m diameter circle on the surface then plunges vertically to a depth of 412 feet/126m. At 130 feet/40m depth inside the hole are the world’s largest underwater dripstones, or stalactites, ever found. Also at Lighthouse Reef, you will find Half Moon Caye, a National Park managed by the Belize Audubon Society. Half Moon Caye is home to a bird colony of rare Red Footed Boobies that can be observed up close by visitors. This Atoll is the furthest out of the Belize Atolls, approximately 66 miles from Hamanasi.

The Turneffe Islands Atoll is the largest of the trio of Belize atolls and also the closest from the Belize coastline. Here you will find an area dominated by purely mangrove islands. These mangrove ranges, both offshore and coastal, make Belize diving so special as they are the nurseries on which almost all marine life depends to insure juvenile protection and biological productivity. Although the atoll is best known for its walls, there are many shallow sea gardens and bright sand flats inside the reef that are excellent for scuba diving.

The official rainy season is June through November, but the bulk of the rain comes in September and October. The summer and fall are wonderful times to be here! It generally is sunny throughout the day and rains at night. (Great sleeping weather!) Hurricanes are fairly rare in Belize and generally do not pose a great threat. The sea is calmest in August and September.

What is the water temperature?

The water temperature is 75-86 degrees Fahrenheit year round.

Indian Ocean, Maldives
Kuredu Resort & Spa, Maldives, lets you choose your favourite accommodation type and perspective to wake up to. Be it the tropical seclusion of Garden Bungalows, the beach side bliss of Beach Bungalows, Beach Villas and Jacuzzi Beach Villas, or the exclusive luxury and comfort of the Water Villas, all accommodation types carry a ‘perfect’ tag.
View Details
Available through out the year:

Bahamas, Caribbean
The resort offers the best of the Bahamas whether you are taking a break from a fast-paced lifestyle, looking to catch the 1,000 lb Blue Marlin or exploring the undersea mysteries of the infamous Bimini Road.
View Details
Available through out the year:
By continuing to browse this site, you agree to our use of cookies.