The Wreck Capital of Europe. Explore historical wrecks from both world wars in this ship graveyard.

Scapa Flow in the Orkney Islands is one of the world’s best dive locations, thanks to the presence of wrecks from the German High Seas Fleet, famously scuttled by their interned crews in Scapa Flow in 1919.

Of the 52 vessels sunk, seven remain on the seabed and it’s these awe-inspiring wartime ghosts that attract divers from around the globe each year.

There are four German cruisers still on the seabed in Scapa Flow in around 36 metres of water. These smaller wrecks offer an easy introduction to the complexity of a warship, with the SMS Koln, still relatively intact. The three battleships remain the main draw to Scapa Flow, though. Resting upside down on the seabed at a depth of around 45 metres, these massive hulks often seem impenetrable at first sight. However, with careful exploration, they come alive and start to reveal their secrets.

Our Scapa Flow Package includes shorebased accommodation in a luxury self-catering property in the heart of Stromness. It sleeps up to 12 divers but separate accommodation is available on request. 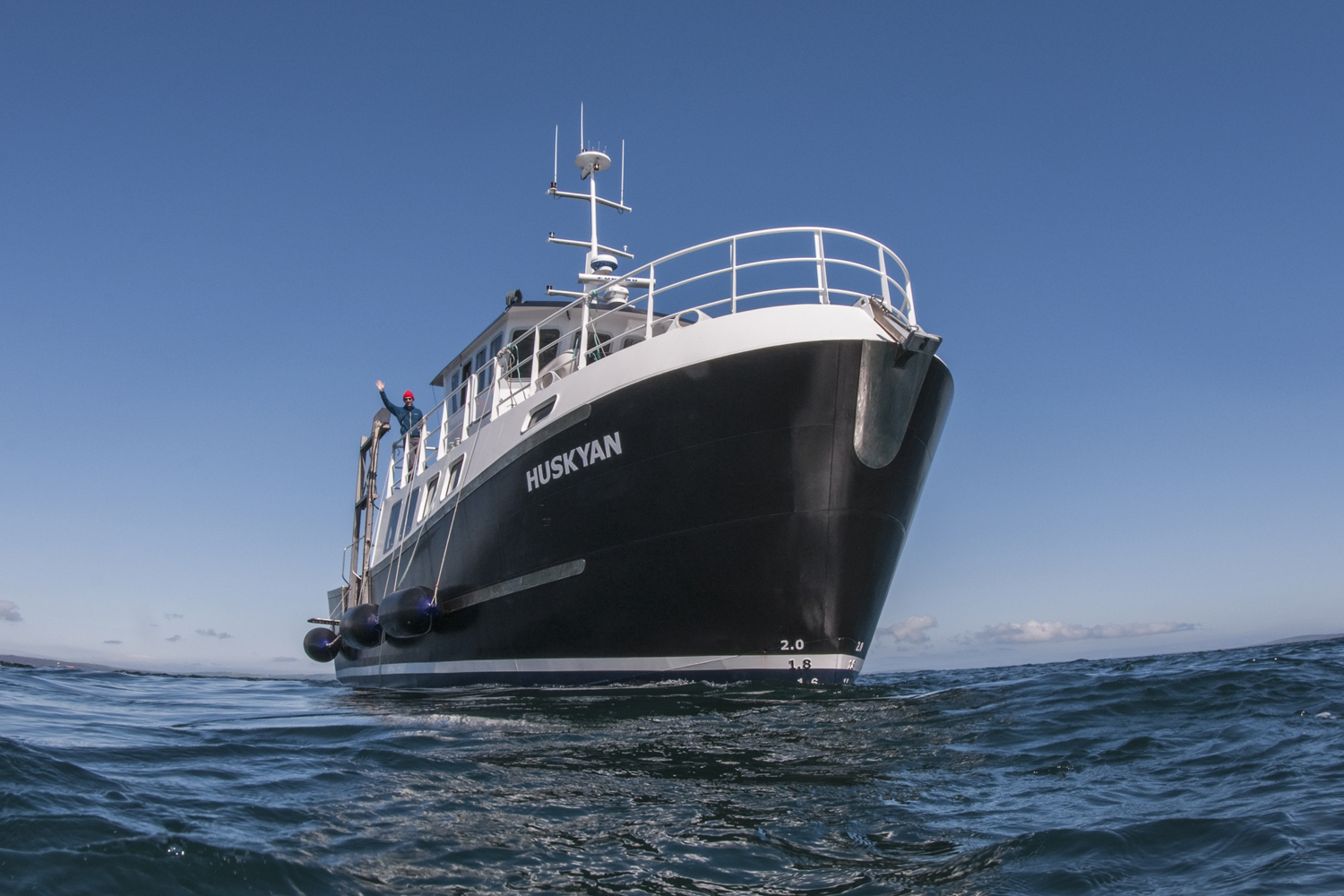 • 6 nights’ accommodation at Number 15 Divers Lodge, Stromness
• 5 days diving (based on 2 dives per day)
• The use of a single 12l or 15l cylinders
• Use of lead weights (please bring your own belts)
• Air fills (nitrox available charged extra, trimix by prior arrangement)
• Complimentary tea, coffee & biscuits. After dive pints of tea served as standard!!!!
• Accurate, in-depth, multi-media dive briefings and history talks. Our hosts have over 40 years combined experience diving the German Fleet. This is the only boat offering this level of briefing in Scapa Flow.

On-board catering: The boat is well known for its delicious homemade food, cakes, bakes and snacks. The on-board catering options will be advertised prior to departure.

HUSKYAN IS THE ONLY PURPOSE BUILT DIVE BOAT IN ORKNEY – DESIGNED BY DIVERS AND BUILT TO LAST.

After months of planning and design the steel arrived at the boat yard in April 2014 – 10 months of building and 70 hours in the North Sea later it arrived in Orkney.

WHAT’S INSIDE…
240 volt power throughout

Dining area – plenty of room for everyone to eat together

Guerra Hydraulic Crane – we crane your dive gear aboard – no more heavy lifting!

Number 15 (Divers Lodge) is a spacious 6 bedroom holiday home designed for your comfort. Just 50 metres to the harbour this is the perfect base for your Scapa Flow holiday. 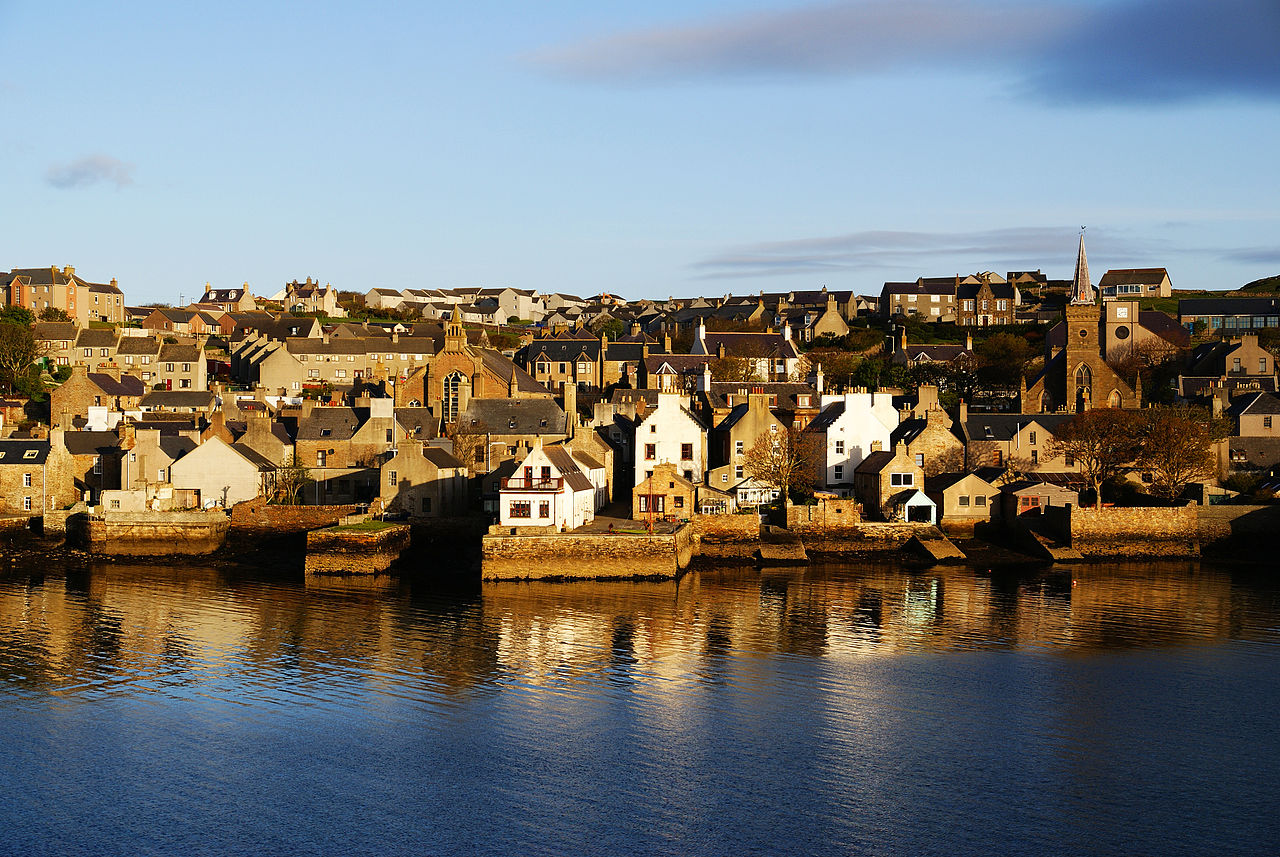 Stromness is the Venice of the North. This picturesque old fishing town, with her winding cobbled streets and open piers, is a great base for your holiday. Cliff top and beech walks are on your doorstep. Pubs, cafes and restaurants, gift shops, craft shops and studio galleries and the world renowned Pier Arts Centre all add to her charm.

The main attraction to Scapa Flow is the WWI German High Seas Fleet, entombed in the still green waters since 1919 following their scuttling by Admiral Von Reuter.

Three 25,797 tonne battleships, three light cruisers, one fast mine layer and numerous other sites related to the sinking lie within the main body of the Flow – all offering fantastic diving.

Covered in life, massive guns and breathtaking levels of preservation means these wrecks have something for everyone. 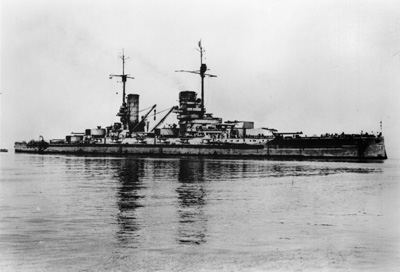 The König gave its name to the fourth class of German Dreadnought, which were the successors of the Kaiser Class.

The König Class were the first battleships to put all their main guns on the centre line of the ship. This consisted of ten 30.5cm guns all in twin turrets. To support this massive armament the König class had seven 15cm casemate guns down each side with another ten smaller 8.8cm guns around her super structure. She also boasted five 50cm submerged torpedo tubes.

All three König class battleships in Scapa are upside-down – the sheer weight of their main armament and superstructure turned them turtle as they sank to the seabed.

The battleships also share the same scars of blast salvage but the Konig has suffered by the far the most damage of the three and as such takes the most work to understand. However this damage exposes features which can’t be seen on the other two. If you can orientate yourself this is a cracking dive. 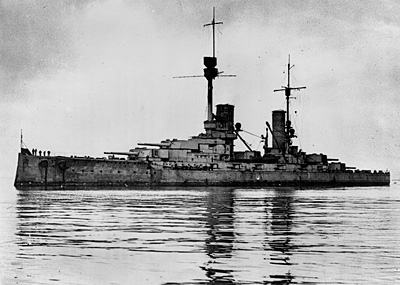 The Markgraf is the deepest of the German fleet lying upside down with a slight list. She is also the most intact making her features even more impressive. The salvage work is far more precise than her sisters – and as such the bow along with the majority of the hull remains intact. She is a superb dive requiring time and multiple visits to truly understand but her depth and scale also demand a level of ability the other wrecks do not.

She lies almost entirely upside down propped up on her starboard side. Both the bow and stern are completely intact – both awesome sites and both some of the defining Scapa images. 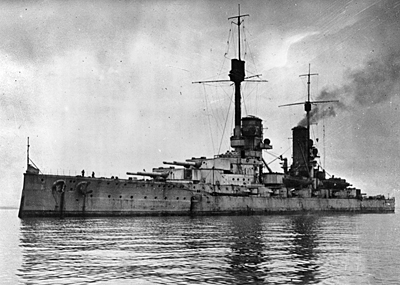 The Kronprinz is the shallowest of the three remaining battleships, and is perhaps why she is more often dived than the others. She lies upside down in 37 metres of water with a more pronounced list than the other two. The main attractions are the stern twelve inch gun turrets the barrels of which are clearly visible. These are just some of the awesome sights the Kronprinz has waiting to be discovered. She bears the same salvage scars as her sister ships but the shallower depth of this battleship make her all the more accessible. 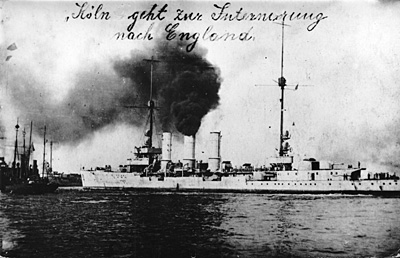 She lies on her starboard side in approximately 36 metres of water.

The least depth over her port side is about 20m.

The Cöln is everything a shipwreck should be. Down the shot line you go and there is an easy to recognise ship! She is in very good condition for a ship nearing her 100th year under water. She is also the most intact of the light cruisers. 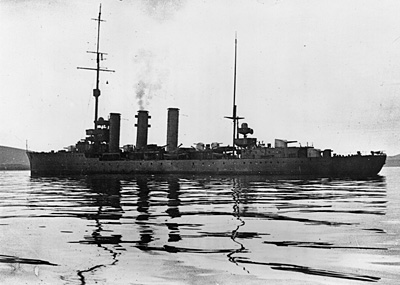 Built as a fast mine layer, the Brummer could reach speeds of 28 knots powered by twin steam turbines. She lies in approximately 36 metres of water on her starboard side. Least depth over her port side is around 25 metres.

As the only example of her class in Scapa the Brummer boasts a layout and array of features that, although similar to the light cruisers, offer an insight into the function of a minelayer. All of her 15 cm guns are still in place as are the anchor capstans, her conning tower and bridge. She also has several features unique to her well worth looking out. 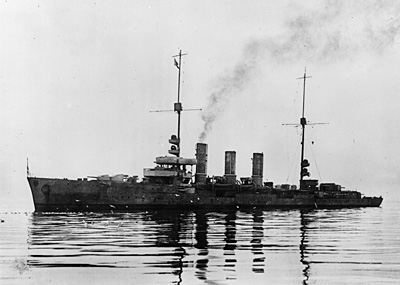 She lies on her port side on a sloping sea bed with her bow in approximately 28 metres and her stern in 37 metres of water.

Being sister ships the Cöln and Dresden share many of the same features. However lying on her port side and on a sloping seabed she makes for a very different dive. 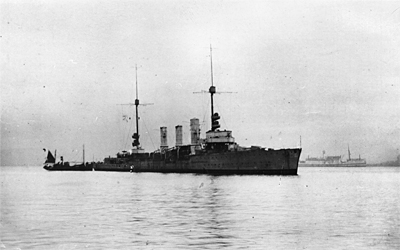 A Chilean steamer sunk in its present position in 1915. She displaced 2,333 tons when afloat but now lies on the bottom in 18 metres of water with a list to port. The stern and bow post sections are still intact but the midships area is fairly broken. This allows easy access in to the inner areas of the wreck. The wreck still has her large iron propeller and rudder in place.

For many years the Dyle has been wrongly named as SS Doyle. She was built for Wm. Johnson of Northshields as the SS Widdrington. In 1886 she was sold to Turner, Brightman & Co of Northshields. She was renamed SS Dyle when she was bought by Van Hemelryck & Geurts of Antwerp in 1902.

She was sold to British ship breakers in 1914 and sunk as a blockship in Burra Sound by the Admiralty in the October of that year.

She lies in 12 – 16 metres of water on a rocky bottom surrounded by a kelp forest. Her bow and stern are intact but she is quite broken in the middle. Her propeller remains one of her best features.

The biggest of the remaining diveable blockships lies upside down in 12 – 14 metres of water. There are several holes blasted in to the side of the wreck to aid sinking which provides excellent access to the interior of the ship. The whole dive can be spent inside the wreck with the triple expansion engine and the boilers all visible.

This can be done just after low water slack, drifting with the first of the flood tide. If you are lucky you will see the three blockships mentioned above as well as the remains of several others which have either broken up or been dispersed. These include the Inverlane, the Budrie, Urmstone Grange, Rotherfield, and Ronda, all sunk during the First or Second World Wars.

She lies in approximately 26 metres of water on her starboard side. The least depth over her port side is 12 metres. Being the shallowest, the Karlsruhe is the most accessible of the German Fleet. She also bears the biggest salvage scars compared to the other cruisers. However, to dismiss her as an easy and broken dive is a mistake. It is true she boasts less structural integrity but this makes her features both external and internal far more accessible and with a little explanation and understanding the wreck can be truly fantastic.

Who can dive there?

You must be a minimum of PADI Deep Specialty or equivalent with 35+ dives.
Drysuit qualified.
You must know how to use an SMB and Reel.

How to get to Scapa Flow, Orkney Isles

Many visitors arrive in Stromness by sea, as this is the main ferry terminal for services from Scrabster on the Scottish mainland. This is certainly the most dramatic approach to the town, which comes into view as the vessel enters Hoy Sound, nestled beneath the dramatic rise of Brinkies Brae. Pentland Ferries run between Gills’ Bay (near John o’Groats) and St Margaret’s Hope (28 miles to Stromness).

Yes, if they wish to stay on land then they just pay for accommodation. If they wish to come on the boat as a spectator then it will be full price.

What if the weather blows the trip out?

As Scapa Flow is a natural harbour, it is very rare for all of the diving to be blown out. There is generally somewhere were you can always dive.

Easy access to dive with Tiger Sharks on Tiger Beach, plus a huge range of other dive sites to explore in the Bahamas.
Bahamas, Caribbean

Easy access to dive with Tiger Sharks on Tiger Beach, plus a huge range of other dive sites to explore...

M/Y Blue Melody is the third vessel in the Blue O Two Fleet and underwent a complete interior re-fit in 2008, followed by an update […]
Red Sea

M/Y Blue Melody is the third vessel in the Blue O Two Fleet and underwent a complete interior re-fit in...

The Wreck Capital of Europe. Explore historical wrecks from both world wars in this ship graveyard.
Europe, UK

The Wreck Capital of Europe. Explore historical wrecks from both world wars in this ship graveyard.

View Details
By continuing to browse this site, you agree to our use of cookies.