The diving in Belize is second to none in the Caribbean with stunning coral atolls with some of the most pristine reefs and bustling marine life to be found and, of course the famous Great Blue Hole 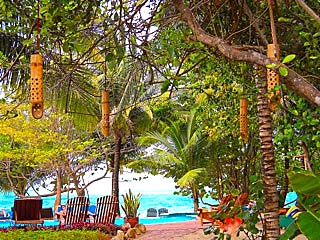 One of the Diving and Snorkelling Wonders of the World

The diving in Belize is second to none in the Caribbean with stunning coral atolls with some of the most pristine reefs and bustling marine life to be found and of course, the famous Great Blue Hole which is on many divers to-do list. Most of the diving departs from Belize City and the surrounding Cays and heads to the Turneffe and Lighthouse Atolls for some spectacular day trips and there is also good local dive diving around Ambergris Cay and Cay Caulker catering to all levels of experience. 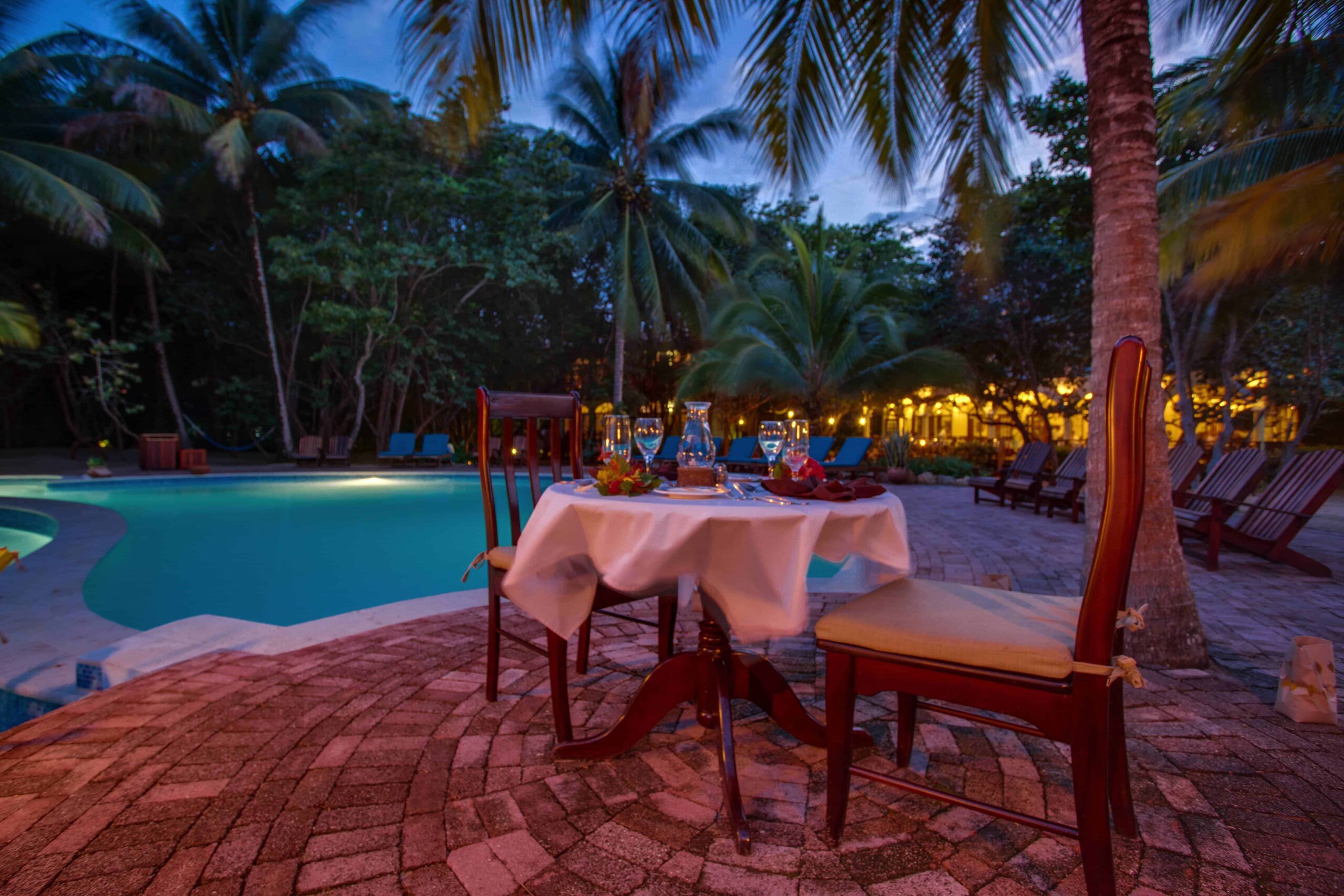 Are you ready to experience both the marine and jungle adventures of Belize? The Reef & Rainforest package provides the most flexibility and savings. Perhaps you want to celebrate your anniversary, honeymoon or special occasion? Check out which of Hamanasi’s Belize all-inclusive packages is right for you!

Nestled between the lush Maya Mountains and the turquoise Caribbean Sea, Hamanasi is a special place from which you can explore the best of Belize on and offshore. A secluded, intimate boutique resort located on the beach south of Hopkins, Hamanasi sits on hundreds of feet of Caribbean Sea beachfront surrounded by tropical flora on the finest stretch of beach in Belize. With a short flight from Atlanta, Charlotte, Dallas, Houston, Miami, New York, Panama City, Toronto or San Salvador you may let the warm tropical breezes melt away your hectic life for the laid-back pace of Belize!

Their signature Reef & Rainforest Packages are flexible all-inclusive Belize packages that are customized to your interests and the length of your stay. Stay in any of their rooms and choose from our most popular adventures both on and offshore. Explore the Reef, the Rainforest, or a combination of both!

The resort can offer dives to the Southern Barrier Reef, Turneffe Island Atoll, Lighthouse Reef Allot, and the Blue Hole.

Are you a diver, but your spouse is not? Do some in your family want to explore inland while some snorkel? Are you just so excited about all that Belize has to offer, that you want to do as many reef and rainforest activities as possible? Hamanasi’s Reef & Rainforest package is ideal for guests who wish to explore Belize’s marine and mainland activities or for guests travelling with companions who have divergent interests.

Most Hamanasi guests choose the Reef & Rainforest package as it makes travel hassle-free and includes all the basics.  Key feature: you can dive or snorkel every day, do only inland adventures or mix and match as you’d like.  Don’t worry, you can schedule your adventures after you arrive at Hamanasi.  See your choices below!

– Air conditioning and ceiling fan in each room

Your daily adventures will begin and end in the casual elegance of Hamanasi Dive & Adventure Resort where our friendly staff with greet you with warm smiles and attentive service. Unwind in spacious, comfortable accommodations with a casually elegant décor featuring handcrafted hardwood furnishings and Central American folk art.  Sleep amidst the jungle canopy in our private treehouses or enjoy the breathtaking ocean views from beachfront rooms.

You’ll be able to kick back and soak in the ocean air on the veranda of our Great House, reminiscent of a plantation home, which is the heart of all activity. Inside you will find the lobby, reception, gift shop, restaurant, library and bar. For incredible panoramic views of the Caribbean and the Maya Mountains climb to the Lookout on top of the Great House — perfect for sunrise and sunset!

Lounge beside our freshwater infinity pool with a tropical cocktail and a good book. Beach chairs, hammocks and beach towels are provided. If you prefer to take your swim in the warm Caribbean waters, it’s just steps away.

At Hamanasi tantalize your taste buds in our Singanga restaurant. Choose to dine in casually elegant surroundings either under the magnificent trusses inside the Great House, on the veranda, or al fresco on the deck. The many cultures of Belize inspire our cuisine. Every effort is made to source the finest local ingredients and have them delivered from the farm to your table, pure and fresh. Organic produce is used from our edible garden, which you are welcome to tour.

Throughout the day the bar at Hamanasi Resort serves up refreshing drinks from icy beers to signature cocktails. Relaxing by the pool? No problem! Our servers would be glad to bring you your drinks as nothing should get between a guest and his lounger – not even a refill! Happy hour daily between 4-6 pm with puzzles and games.

Hamanasi dive trips explore areas in and around the South Water Caye Marine Reserve, the largest marine reserve in Belize, spanning from just north of Tobacco Caye to a cut five miles south of South Water Caye called Grand Channel. The trip out to the Southern Barrier Reef is ten miles and it takes 30-40 minutes to get to the first dive site. This pristine southern section of the reef sees few divers and is typically a wall dive that is interspersed with sand channels and spur and groove sections. With literally dozens of dive sites, Hamanasi divemasters will show you a wide variety of this area.

In Southern Belize and directly offshore from Hamanasi is Glover’s Reef Atoll. Named after the 17th century pirate John Glover, who used the remote islands as the base for his raids against Spanish galleons heading to and from the Bay Islands of Honduras, Glover’s Reef probably best represents the incredible diversity and pure diving potential that Belize has to offer. We motor out sixteen miles past the Barrier Reef which takes us just over one hour to the first dive site. If visibility is good we like to dive a site called “The Pinnacles”, which has enormous coral heads rising up 40 ft/12 m or more from the bottom. Our second and third dives are on the east side of the atoll where the water depth quickly drops off to more than 2000ft/660m and visibility is usually over 100 feet.
They dive several sites on this side of the Atoll and usually dive Long Caye Wall, a world class dive that is always memorable. At this site they drop you onto a big field of bright white sand at 40 feet/12 m, home to southern stingrays and garden eels. While descending you can spot garden eels slowly dropping into their holes. As you approach the wall running the length of the sandy area it looks like the coral is growing out of the sand bottom in big chunks. Just as you crest the wall the sand appears to be running like small rivers down through the coral into mini canyons. With the usual 100+ ft/30+m visibility, the view down the wall gives the impression of limitless space. We follow the top of the wall and explore the sand channels exploding with fish and marine life. Travel time to Glover’s is approximately 1.5 hours.

Lighthouse Reef Atoll is known worldwide in scuba diving circles for its spectacular diving, but it is most famous for a site called the Great Blue Hole. Originally a cave whose roof collapsed thousands of years ago and filled with water, the Blue Hole forms a perfect 1,000 foot/300m diameter circle on the surface then plunges vertically to a depth of 412 feet/126m. At 130 feet/40m depth inside the hole are the world’s largest underwater dripstones, or stalactites, ever found. Also at Lighthouse Reef, you will find Half Moon Caye, a National Park managed by the Belize Audubon Society. Half Moon Caye is home to a bird colony of rare Red Footed Boobies that can be observed up close by visitors. This Atoll is the furthest out of the Belize Atolls, approximately 66 miles from Hamanasi.
We start this trip bright and early and head 66 miles to the Great Blue Hole, which takes approximately 2.5 hours. Once there you can go down 130 feet/40m to view the largest underwater dripstones on the planet. We have two Blue Hole dive profiles. Only experienced, comfortable divers, who have previously conducted a barrier reef dive WITH Hamanasi, will be permitted to dive to 130 feet/40m. Other divers will enjoy a comfortable, 60-foot/18m Blue Hole dive. After the Blue Hole, we head a short distance to Half Moon Caye Bird Sanctuary. Located at the southeast corner of Lighthouse Reef, Half Moon Caye has some of Belize’s clearest waters and finest beaches. This 45-acre island managed by the Belize Audubon Society was declared a natural monument in 1981, largely because of its Hawk’s Bill and Loggerhead Turtle nesting sites, as well as its 4,000 red footed boobies. These rare birds are a glistening white color with bright red webbed feet. The birds nest in the heavily wooded west end of the island where there is a viewing platform allowing visitors an unbelievable view of both the reefs and the trees covered with booby and frigate birds. Our second dive explores the Half Moon Caye wall, a unique topography of swim-through channels. Immense coral buttresses are decorated with black corals, gorgonian, sea whips and a variety of brightly colored sponges, as well as a profusion of reef fish and cruising pelagics. Divers then return to Half Moon Caye for a picnic lunch and a relaxing surface interval before heading out to Long Caye for our third and final dive. Perched on the edge of the cobalt blue abyss The Aquarium starts in only 15-20 feet/4-6m of water before plummeting downward. This site offers what is arguably some of Belize’s most prolific and high energy diving. We then depart for our 2-hour journey home with the wind at our back and the sun setting over the Maya Mountains before us.

See the Turneffe and Lighthouse Reef Atolls in one trip

This trip was created by taking three of the most popular dive sites and combining them to produce “The Ultimate”. Snorkelers may join this trip! There are two snorkel sessions only, one each at the 2nd and 3rd sites. For the first dive we aim for one of Belize’s most famous dive sites on Turneffe Islands Atoll, “The Elbow”, where there is a convergence of several ocean currents passing by canyon-type formations. Here we may swim through a profusion of marine life from enormous schools of horse-eye jacks to permit, from sharks to eagle rays!
During our surface interval we cruise out to Lighthouse Reef Atoll.  Our second dive explores Half Moon Caye Wall, a unique topography of swim-through channels.  Immense coral buttresses are decorated with black corals, gorgonian, sea whips and a variety of brightly colored sponges, as well as a profusion of reef fish and cruising pelagics.  After a relaxing surface interval we head out to Long Caye for our third and final dive site.  Perched on the edge of the cobalt blue abyss “The Aquarium” starts in only 15-20 ft/5-7 m of water before plummeting downward.  This site offers what is arguably some of Belize’s most prolific and high energy diving.  Travel time to first dive site is approximately 1.5 hours.
By continuing to browse the site you are agreeing to our use of cookies.