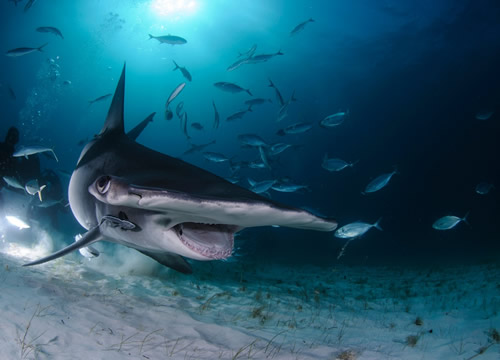 The Galapagos Islands is probably the best diving destination in the world for people who like the BIG STUFF and want to spot unusual marine life. We ran a trip in July 2017 and everyone agreed that it was the most magnificent thing they had ever witnessed. You can read the BLOG article and see some of our FACEBOOK photos to see just what we mean! The Galapagos is truly the Mecca for divers!

Made famous by Darwin the Galapagos are a group of Islands found approximately 600 miles from the African and lies on the equator.

The Galapagos is one of those rare places where you can dive through hundreds of hammerhead sharks as well as finding a whale sharks cruising along the surface.  Toss in silky sharks, sea turtles, giant morays and schooling fish in their thousands… And that’s just the first dive at Darwin!

At Wolf Island you can expect huge Galapagos sharks, eagle rays up close and even more hammerhead sharks, whilst other dive sites allow you to witness 2-3m Mola Mola that are like mini-swimming planets, seals on a variety of dive sites and it is also the only place on the planet where you get marine iguanas.

This is but a mere taste of why divers consistently proclaim the Galapagos to have the healthiest marine life in the Pacific. Here are just a few shots that we took during our trip in 2017:

Punta Carrion – This boulder strewn reef provides a superb introduction to some of the larger pelagics we expect to see in the Galapagos, including white tip reef sharks but also the occasional hammerhead and Galapagos shark. Sea lions are ever-present and there is the opportunity for some macro critter spotting with sightings of neon nudibranchs. The wall has an average depth of 15m (50ft) and mild-medium current is to be expected.

Wolf Island – Named after the German geologist, Theodor Wolf, this extinct volcano reaches 253m (780ft) above sea level and lies some 160km (100 miles) northwest of Isabela Island. Land visits are not permitted however bird life, including red-footed boobys and vampire finch, may be spotted from the boat.

For our dives here we choose from a selection of reefs and walls, most having typically medium to strong currents where the use of gloves and reef hooks is advised. Schooling pelagics are the main draw with sightings of hammerheads, white tips and Galapagos sharks at each site. During the season (May – November) whale sharks may also be seen here. Divers should also be on the lookout for red-lipped batfish, barracudas, moray eels and dolphins!

Darwin Island – This extinct volcano reaching 165m (490ft) above sea level was named in honour of naturalist Charles Darwin. It is amongst the smallest island within the Galapagos Archipelago and like Wolf Island, no land visits are permitted.

Perhaps the most famed dive site is “Darwin’s Arch” which provides an amazing drift dive along the wall at an average depth of just 9m. Medium to strong currents are to be expected but bring with them hammerheads, black tips, silky and Galapagos sharks – and in large numbers! Schools of jacks are a common sight, along with turtles, angelfish and moray eels. Occasional sightings of tiger sharks, manta rays and bottle nose dolphins make for a thrilling time spent here. Whale sharks may also be seen between May – November.

Douglas Cape – Situated on the northwest point of Fernandina Island, this wall dive, with an average depth of 20m (70ft), offers something truly spectacular and is now famed for the feeding marine iguanas that congregate here along with sea lions, fur seals and speedy penguins!

Punta Vicente Roca – Alternatively known as “The Ice Box”, due to its chilling thermoclines, this point off the Northwest coast of Isabela Island offers a wall drift dive, along which mola mola can be spotted. The occasional Port Jackson shark may also be seen as well as the endemic Camotillo (White spotted sand bass).

Roca Redonda – This underwater volcano, with its bubbling streams of natural gas (fumaroles) plays home to schools hammerheads sharks and barracuda. With typically strong, changeable currents and some down currents, the diving here is challenging, though with an average depth of 18m (60ft).

Cabo Marshall – The craggy volcanic walls are covered with black coral bushes and the sheer variety of marine life is astounding. Sightings of manta, mobula and cownose rays are to be expected during the warm season (November – May). Meanwhile shark varieties include scalloped hammerhead, Galapagos and white tips. Let’s not forget the sea lions and turtles!

Cousin’s Rock – One of the most photographically productive dives of the region, Cousin’s Rock is formed of coral covered rock and lava flow. Sea fans, hydroid bushes, red sponges and small hard corals encrust ledges and overhangs, sheltering hawkfish, nudibranchs, frogfish and seahorses. Plenty of larger visitors are also seen including giant manta and mobula rays, spotted eagle rays and hammerhead sharks. The wall drops beyond 30m (100ft) but rises up shallow to just 3m (10ft) providing an ideal spot to end your dive playing with the sea lions.

On a typical day we offer up to 4 day dives however the 4th day dive may be substituted for a night dive when the boat is anchored within a sheltered cove. A 7-night itinerary provides for between 18-20 dives.

The diving day aboard the Galapagos Master is scheduled as follows:-

To allow our guests to explore the Galapagos to its fullest, on two days dives 3 and 4 will be substituted by an island visits at North Seymour, Santa Cruz or Isla Isabela. This is also remarkable and lets you come face-to-face with blue footies boobies, iguanas, giant tortoises, frigate birds, sea lions, marine iguanas and a host of other species.

Diving in the Galapagos can be challenging, even for the experienced diver. At many sites currents can be strong and visibility may diminish due to currents and an influx of nutrients. You will need to be a minimum of Advanced Open Water Diver with at least 50 logged dives, preferably in similar conditions.

Water temperature ranges from 21-30°C (70-86°F) between December and May when manta rays are more commonly sighted. However it drops to an average of 16-24°C (60-75°F) between June and November when the Humboldt Current comes up from the south, bringing with it plankton; making this the best time for seeing whale sharks. Thermoclines can also be expected and divers are advised to bring suitable thermal protection.

There will also be the opportunity to add on a couple of days for extra land based activities – details will be announced in due course.

Depending on the flights closer to the time we normally stay in Ecuador for an evening on the way and on the return, this is a great experience in itself!

Add 3 days land based extension including accommodation and 3 day ‘footsteps of Darwin tour’ from approx £1,500.

Built in 2004 the yacht, known as Deep Blue, the Galapagos Master underwent a full refit in November 2014. The refit was supervised by the experienced yacht builders of Worldwide Dive and Sail, Jan & Frank van der Linde, who have also brought you the Siren Fleet.

Communal areas comprise of a spacious indoor lounge, on the middle level, with cushioned bench seating and plasma screen for movie and photo viewing.  Adjacent to the lounge is our indoor dining area complete with cocktail bar. An indoor camera set-up station, with numerous charging points (US round pin plug) and storage drawers is situated to the rear providing ample room for a full photography charter group. Further camera preparation areas can be found on the rear deck next to the dive deck.

Guests are free to take advantage of the gangways on both the port and starboard sides to walk around the yacht or visit the Captain in his bridge on the upper deck.

The dive equipment set up is found on the aft deck of the lower level. We provide individual set up areas, with under bench storage for all your personal items. Rinse tanks are conveniently located for washing dive equipment and camera gear, whilst there are 2 shower heads for those wishing for a quick post-dive rinse down. A further 2 deck heads are situated on the starboard side of the boat, just in front of the salon entrance.

Non-divers are welcome but there are few snorkelling opportunities available.

BOAT PRICE including transfers, all meals and dives £4,300 on the lower deck and £4,400 for the upper deck based on 2 people sharing.

Balance payable by end May 2021

– All meals & accommodations during the cruise
– Tea, fresh coffee from our espresso machine, fruit juice & soft drinks
– Between 18-20 dives
– Minimum 2 land visits
– Transfer between San Cristobal Airport/Local Hotel and Galapagos Master on the days of embarkation and disembarkation

If you need to hire equipment then it is £100 from us for the entire duration including BCD, regs, weight belt, mask, fins and boots. Does not include torch or dive computer.

There are only 15 spaces available so please book your space ASAP to avoid disappointment.

Oyster Diving offers and sells flight packages as the agent of ATOL holders. When you pay us for a flight package you will be supplied with an ATOL certificate. Please ask for it and check to ensure that everything you booked (flights, hotels and other services) is listed on it. For further information or for more information about financial protection and the ATOL Certificate go to: www.atol.org.uk/ATOLcertificate.